A field-programmable gate or grid array (FPGA) and a microcontroller are similar, but not the same. They are both essentially “small computers” or integrated circuits embedded in other devices and products. The main difference is in the title. Users can program the hardware of FPGAs after manufacture, making them “field-programmable,” while microcontrollers are only customizable on a more superficial level. Additionally, FPGAs can handle parallel inputs while microcontrollers read one line of code at a time.

Because they allow for a greater level of personalization, FPGAs are both more expensive and more difficult to program. In contrast, microcontrollers are cost-effective but much less customizable. Learn more about the similarities and differences between microcontrollers and FPGAs. One is not necessarily better than the other — when deciding which to use, consider multiple factors.

What Is a Microcontroller?

A microcontroller (MCU) is basically a small computer. It has all the same elements as other computers, including a central processing unit (CPU), some random-access memory (RAM) and input and output devices. Unlike a desktop computer, which can run thousands of different programs, a microcontroller is a special-purpose device that performs one program.

It’s made to do one thing repeatedly, automatically or at user request. It’s embedded in some other device, whether a consumer, manufacturer, medical or other type of product. It runs on low energy — its power consumption is measurable in milliamps. As a result, microcontrollers tend to be affordable. The device in which it’s embedded can vary greatly in cost, however.

In addition to consumer items, microcontrollers are also embedded within the following devices:

These are only a few examples — microcontrollers are embedded within all kinds of devices we rely on in modern society. Each microcontroller has a specific, repetitive purpose. It can operate automatically using a feedback control system, as you would find with traffic lights. Or, it can operate at user input signals, like flipping a switch or pressing a button. This latter concept is true for your microwave, laundry machine and television remote control.

What Is a Field Programmable Grid Array?

A field-programmable gate or grid array is a little more complicated than a microcontroller. Most of the time, a chip comes pre-programmed. As the user, you can change software, but not hardware. This brings us to the defining element of an FPGA — you, the user, can configure its hardware after purchase.

Engineers find this especially useful for prototyping their own application-specific integrated circuits. In fact, Intel uses a form of FPGA to streamline their own prototyping process. FPGAs are also useful because the devices in which FPGAs are embedded can be altered without needing all-new hardware.

Per the example given by “FPGAs for Dummies,” regulations might change to demand that vehicle rear-view cameras operate faster. If these cameras run on FPGAs, manufacturers can make this change without installing expensive, all-new hardware. They can simply reprogram the FPGA in each car’s rear-view camera. Cars that are already on the road can be altered rather than rendered obsolete.

How Does It Work?

FPGAs have an “array” of integrated hardware circuits — these arrays are groups of programmable logic blocks. During manufacturing, an FPGA has not been configured to have any particular function. Instead, the user can configure it and later reconfigure it however they choose.

The user does this using a hardware description language (HDL). An FPGA has logic blocks, like AND and XOR, which the user can piece together with interconnects. Modern FPGAs have many logic gates and RAM blocks, so they can accommodate complex computations. Some FPGAs also have analog-to-digital converters or digital-to-analog converters, similar to field-programmable analog arrays (FPAAs).

Both FPGAs and microcontrollers have the same basic purpose — they are both built in a way that allows a manufacturer or end-user to determine their function. They both perform specific applications and are embedded within other devices, whether a traffic light or laundry machine. This versatility is why you can find them all around you. Everything we do is easier thanks to these little integrated circuits.

To an untrained eye, they look roughly the same. Both are flat, square, tiny chips surrounded by programmable pins. They’re both essentially miniature computers, programmed for a distinct purpose. For this reason, neither an FPGA nor a microcontroller can serve as a personal or desktop computer. Instead, they follow commands to perform one function at varying levels of complexity.

These devices have several fundamental similarities. In fact, they’re comprised of the same basic components. An FPGA and a microcontroller are both integrated circuits that operate using computer logic and binary.

An integrated circuit is a set of electronic circuits on one flat chip, which consists of semiconductor material — often silicon. It can perform calculations and store data. Integrated circuits use either digital or analog technology — as mentioned above, some FPGAs can convert between the two. Digital technology utilizes binary logic, while analog technology determines a linear function of an input to calculate an output.

This basic concept, input determining output, describes how all computers work. Digital technology incorporates a two-valued logic system, or binary — one or zero, on or off, yes or no. It’s important to understand the basics of computer logic when programming either a microcontroller or an FPGA.

Additionally, both FPGAs and microcontrollers are programmable after production to some extent — meaning either a manufacturer or end-user can design their function and embed them as needed. This is why these devices have so many applications in a broad array of industries.

The extent to which you can customize an FPGA sets it apart, which is why these are most useful for complicated, highly technical applications. On the other hand, a microcontroller is better for simpler applications.

The main difference between an FPGA and microcontroller is the level of customization and complexity. They also vary in price and ease of use. Essentially, an FPGA allows for greater customization and more complex processes, as well as retroactive changes to hardware. A user needs more skill and know-how to use an FPGA.

While FPGAs have their advantages, microcontrollers cost less and are easier to use. Most hobbyists or beginners would benefit from purchasing microcontrollers, while engineering companies and manufacturers may prefer FPGAs.

The defining characteristics of microcontrollers include: 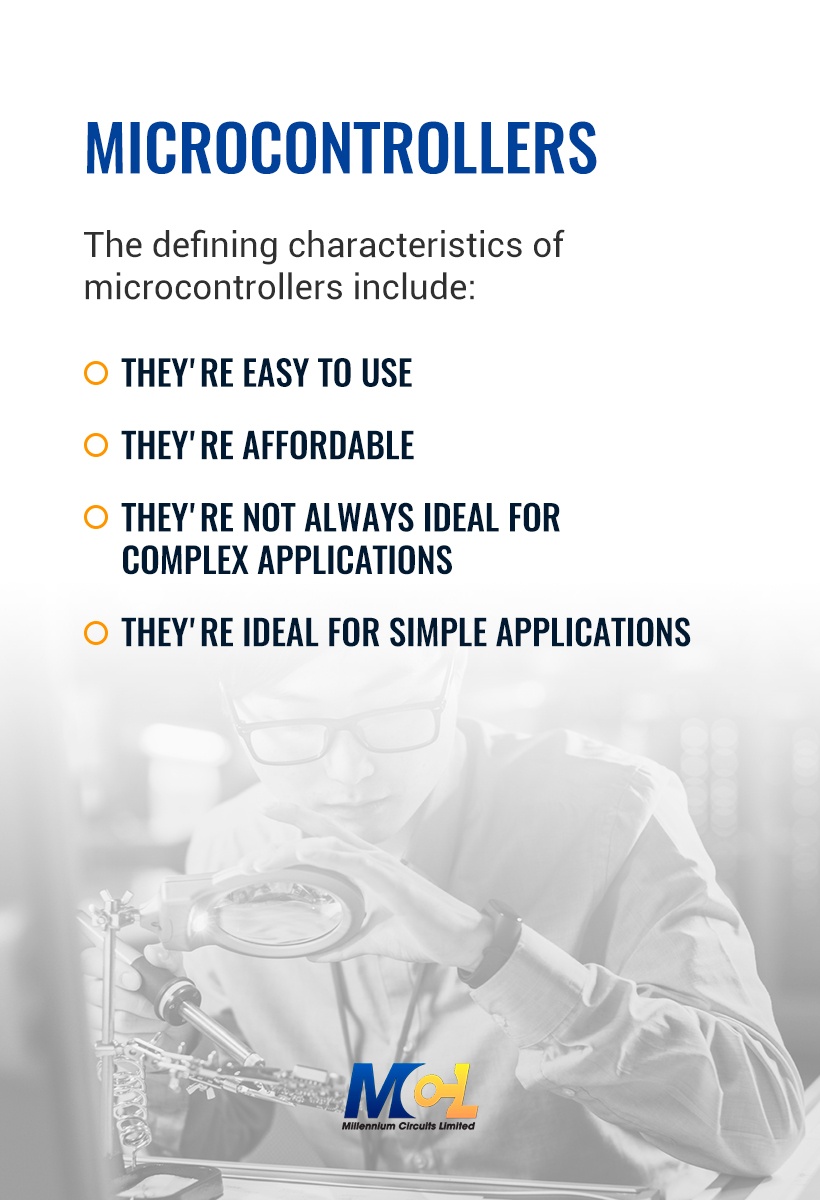 Some defining characteristics of FPGAs include:

Should I Use a Microcontroller or an FPGA in My Printed Circuit Board (PCB)?

A printed circuit board brings a schematic drawing to life. The more conductive layers the board has, the more connections you can make. A four-layer board will have four conductive layers, with insulating layers between. Assembling a PCB requires a decent bit of technical knowledge, so read up on the jargon if you’re assembling one for the first time. You may opt to rely on a professional PCB production service or PCB supplier.

Whether you use a microcontroller or an FPGA in your PCB should depend on several factors, including:

The Necessary Level of Complexity

FPGAs can execute multiple lines of code at once, allowing for independent, parallel processes. For highly advanced applications, this capability is a necessity. An FPGA can handle more complicated inputs and can perform simultaneous operations. The drawback is that FPGAs require perfect timing and accuracy to function properly. A tiny mistake can render the whole system useless.

In contrast, microcontrollers only read one line of code at a time, processing commands in sequence. Though this can lead to a bottlenecking issue, it has its advantages. Because they’re less complicated, microcontrollers are easier to program and reprogram using a trial-and-error method. For simple applications, an FPGA may be more complicated than necessary, and it may make programming harder than it needs to be.

If a mistake is made in the programming of an FPGA, repairs are much more complex. This brings us to our next point, which is that your choice between an FPGA vs. a microcontroller will need to depend on your level of expertise.

Your Level of Expertise

In simple terms, an FPGA is not the right choice for a beginner. Hardware description languages take more time and experience to learn than assembly languages. A greater level of customization means more skill is required. If you have a lot of experience with computer engineering, an FPGA will afford you an attractive level of customizability.

Keep in mind that FPGAs do tend to be more expensive in their initial cost than microcontrollers. If you’re looking to program something simple, like an auto-dimming light or a temperature sensor, a relatively cost-effective microcontroller might be the better option.

Though their initial cost is greater, FPGAs can reduce expenses later — especially in mass-produced objects that may need to be altered after original assembly.

Your Need for Retroactive Alteration

For any number of reasons, you may find you need to alter the hardware of your application. In that case, you’ll be glad to have an FPGA. This is part of why so many industries prefer FPGAs. When laws, standards, regulations or needs change, it’s much less expensive and time-consuming to alter existing FPGAs rather than implement all-new hardware systems.

Both FPGAs and microcontrollers are valuable for a wide variety of purposes. Their versatility lends them to thousands of applications, some of which we use every single day. Understanding the similarities and differences between them will help you determine which is the best option for your purposes.

While they consist of the same basic components, they’re different in their level of customization, complexity, price and required level of expertise. Choosing one over the other should depend on multiple factors. Each solution has unique benefits and potential drawbacks.

Whether you’re designing a do-it-yourself project, creating a prototype for a new product or looking to streamline a technical process, one of these integrated circuits is bound to be useful. If you have any questions about FPGA or microcontroller technology used on bare PCBs, contact the experts at Millennium Circuits Limited for more information.