Jump To: How Moisture Can Affect a PCB | Detecting and Removing Moisture | Why Does It Happen? | IPC Standards For Moisture | How to Prevent Moisture In PCBs | How to Remove Moisture From PCBs | Printed Circuit Boards From MCL

While the effects of delamination can be detected via thermal imaging and acoustic microscopy, they won’t always show in the form of obvious symptoms like discoloration and blistered surfaces. Overall, it’s highly preferable to prevent moisture from reaching the PCB in the first place. This protection can be achieved through processes like pre-baking and proper storage. The design of the PCB can also affect whether moisture is more or less likely to be an issue. One of the most troubling issues with printed circuit boards (PCBs) involves the presence of moisture. If moisture exists within a PCB, the destabilization caused by it is liable to have a delaminating effect on the surface elements. Anytime soldering or rework is applied to the PCB, the delamination could easily expand as a result of the moisture contents.

How Moisture Can Affect a PCB

The presence of moisture can lead to various functional failures on a PCB, depending on which components or conductive paths come into contact with it as diffusion takes hold. Moisture can fester in the epoxy glass, resin or glass interfaces and cracks in a board. Problems commonly associated with moisture include slowed circuit speeds and increased delay times with the functions of a corresponding device. If the problem exceeds a certain limit, the device might simply fail to activate.

Tests have been conducted that show the effects of moisture absorption and desorption in printed circuit boards. In a PCB with plated through-holes of varying density, trapped amounts of moisture have different desorption rates based on the distance between each hole. In PCBs that are heavily saturated, desorption can take hundreds of hours within high-temperature environments.

When measurements are made of a PCB’s ability to store electric energy, a change in moisture content can be detected within the board. Capacitance sensors are used in this process. Capacitance levels move in inverse proportion to hole density. If the latter is high, the former is low because there’s less distance between the moisture and the surface but more space for the moisture to escape.

In non-PTH PCBs, capacitance decreases at a more rapid pace. As such, less bake time is needed for these boards to have a low enough moisture level. On PTH boards, there’s less exposed surface room for the moisture to escape.

Due to the inverse effect of copper planes on the desorption process, they should be baked with consideration for their design. On one hand, you can empty moisture more effectively from a board by running the baking process for longer periods, but doing so could reduce the board’s solderability and functional capacity. Consequently, bake time should be measured to avoid these possible side effects.

The process of moisture removal does not always yield predictable results. For example, a pair of identical copper planes could undergo a central flare-up of moisture as the baking gets underway, only to diffuse moments later. If this momentary swell of moisture occurs in an area of the board where delamination is most probable, it could be the unintended side effect of baking.

On some boards, moisture removal is simply not possible once the moisture has diffused through several layers. Therefore, it’s crucial to employ measures to prevent moisture from entering into the board during the initial process of assembly.

Why Does It Happen?

One of the most common ways for PCBs to be exposed to moisture is through contact with cold winter air. In cold temperatures, there’s not enough heat within the atmospheric air to absorb moisture. As a result, the moisturized content of the air is released onto cold surfaces. If a surface becomes colder than the air itself, that surface can serve as a magnet for released moisture, or condensate. This process is why windows often get foggy during the wintertime.

Cold items placed in proximity to areas of condensation are also liable to attract moisture from the air. For example, a vase placed along the sill of a foggy window is liable to become damp with droplets of moisture. Any surface that could become colder than the inside air and hold standing water can serve as a magnet, including the surfaces of computer components.

The internal and external surfaces of an inactive computer or peripheral device can easily become cold in the winter months. As the surfaces become colder than the air itself, they attract moisture. With inside components, the problem can be exacerbated if no vent holes are present for the moisture to escape. PCBs, for example, can be situated horizontally inside a computer box, scanner, video player or stereo device. During hours of the day when the house is empty and the heat and electricity are both off despite low outside temperatures, these devices can serve as moisture magnets.

As moisture diffuses onto the surfaces of PCBs and other internal circuitry, the devices can eventually fail to power back on. When a device is left dormant over the winter months and fails to activate come springtime, internalized moisture is sometimes the cause. Since the device itself has been inactive, there has been no internal heat generation within the unit during the span of time in question.

Additional ways that moisture can accumulate on PCBs include the following:

In 2010, IPC standards for PCB moisture control were established to redress the neglect this topic had received in the overall scope of PCB maintenance. Coated solder boards can retain their solderability for longer periods as long as measures are taken to prevent moisture from entering the boards. Alternately, boards can last longer if proper steps are employed to diffuse moisture.

According to the guidelines, baking is a practical method for moisture removal from PCBs on which pre-existing process controls have failed to prevent the entrance of moisture. However, the guidelines also warn that baking leads to increased expenses, further cycle time and decreased solderability. The baking process also consists of further handling, which can cause damage and inflict contamination on a PCB. Therefore, the need for baking should be avoided as much as possible with preventative maintenance during the assembly, handling and storage of PCBs.

The document especially warns against the baking of organic solderability preservative (OSP) coats because the effects of baking diminish the finish. In lead-free soldering, OSP coats are common due to the cost-effective and easy steps involved in their application. Despite these advantages, OSP layers can easily oxidate due to the simplicity of the coating layer, which is the only thing protecting the underlying copper surface. It takes only a couple of minutes for surface separation and moisture diffusion to occur with an OSP coat.

PCBs are often shipped in packaging that renders the boards vulnerable to moisture absorption. In many cases, PCBs are shipped in foil bags or ESD bags. Consequently, such boards often arrive with dangerous amounts of moisture diffusion. If they’re stored in the packages after being received, the boards could easily be ruined in a matter of months. PCBs should instead be shipped and stored in Moisture Barrier Bags (MBBs).

How to Prevent Moisture In PCBs 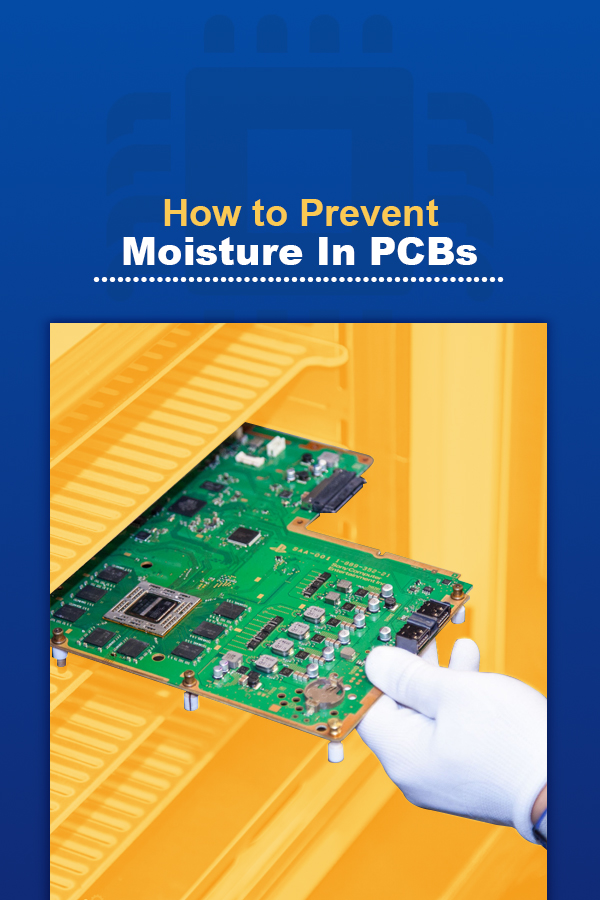 During the manfuacturing of PCBs, the lamination process should be conducted in a temperature-controlled environment where the air system is regulated with desiccant drying agents. It’s also crucial to wear fresh gloves during each work cycle to avoid the spread of contamination between different components.

The very process of PCB lamination has a dehydrating effect on the finished product. It’s during this stage that the prepregs and cores are put into place and the layers are bonded into a single board. Some manufacturers apply a low-pressure vacuum effect during this stage to prevent internal voids that could possibly trap moisture within the layers.

Among certain PCB fabricators, it’s common practice to bake the prepregs prior to lamination. The goal here is to prevent moisture pockets and blisters from forming on the finished board. This step is most useful when the prepreg has spent a certain length of time beforehand in an unregulated storage environment. Otherwise, this step is generally not necessary.

How to Remove Moisture From PCBs

The main method for eliminating moisture from a PCB is baking, during which high levels of heat are applied to force out embedded traces of moisture. Baking is a popular method because high temperatures are an effective means of moisture removal in most settings. As heat works its way through the layers subjected to this treatment, the effects will usually be thorough and lasting. Baking is often employed during the assembly stage before PCBs are shipped to stores and electronics factories.

Despite the often-positive effects of baking, the process can also have its drawbacks. If a PCB contains large copper planes, moisture concentrations might swell at first during the backing process, causing delamination as a result. It’s during those seconds of swelling that moisture diffusion can occur. Once that happens, the process of moisture removal becomes far more difficult, if not impossible.

It’s important for PCBs to be properly stored in dry compartments. When they’re shipped and kept in reserve, PCBs should be packaged in MBBs. Dry storage units with dehumidified air can prevent moisture exposure during the weeks or months that a PCB awaits use in a computer or electronic device.

A PCB contained in an active device could possibly be in contact with moisture if the device itself has sat in a moisture-ridden environment. Situated in a room with fogged windows, a deactivated device could easily have moisturized surfaces on the inside and outside, even if the problem is not apparent to the naked eye. You can avoid this issue by keeping electronic units active during cold months and maintaining reasonably warm indoor temperatures. An active computer, for example, will generate sufficient internal heat to eliminate moisture from PCBs and other components.

PCB moisture absorption is an important issue to recognize if you use printed circuit boards for products of any kind. To ensure lengthy board life, PCB handling precautions are necessary to master throughout all stages of assembly, handling, shipment, storage, installation, maintenance and relocation.

At MCL, our technicians are professionally trained in the safe handling of PCBs, and we ensure that each PCB shipped from our location is sent in moisture-safe packaging. To learn more about our PCBs, contact MCL today to receive a quote.