The last thing any designer wants is to discover last-minute that their product is faulty. Electronics of all types, even if they’re properly designed and meticulously built, are prone to problems. Many electronics come out of the prototype stage with plenty of bugs and issues for their designers to troubleshoot. However, when something is left unnoticed until the product is out in the field, it can mean huge problems for the company.

Testing electronics is so important, especially for printed circuit boards (PCBs), because it prevents several problems from occurring. To get a clearer idea of how PCB testing can improve your PCB products, learn more about what PCB testing is and which primary methods are used to evaluate PCBs.

Why PCB Testing Is Necessary

Testing is a crucial part of the manufacturing process for PCBs. When PCB testing is conducted throughout the production cycle, it can help save money and prevent issues when it comes to the final production run.

Some design analysis techniques can be used during the early stages to help minimize major issues during the manufacturing process, but there’s also a wide range of PCB testing methods that can be used on physical boards. These tests, run on prototypes or small-scale assemblies, look most closely at potential shorts, solder joint issues and functionality, ensuring that each tested PCB will function as intended.

Many companies see PCB testing as an absolute must due to the many advantages it provides them. Check out some of the following top advantages of PCB testing:

While thorough testing isn’t necessary for all types of PCBs, especially matured products well into their product life cycle, the majority of new PCB designs need robust and frequent testing of the design process. By establishing an appropriate PCB testing procedure for your organization’s needs, you can experience the benefits of PCB testing.

What Is PCB Testing and What Is Being Tested?

Circuit board testing procedures evaluate several components of PCBs. These components are analyzed in detail to ensure their quality. The primary components tested can be found below:

Most of these factors are analyzed in early materials testing and environmental tests. However, factors like electrical conductivity and general functionality are analyzed with various methods and equipment. 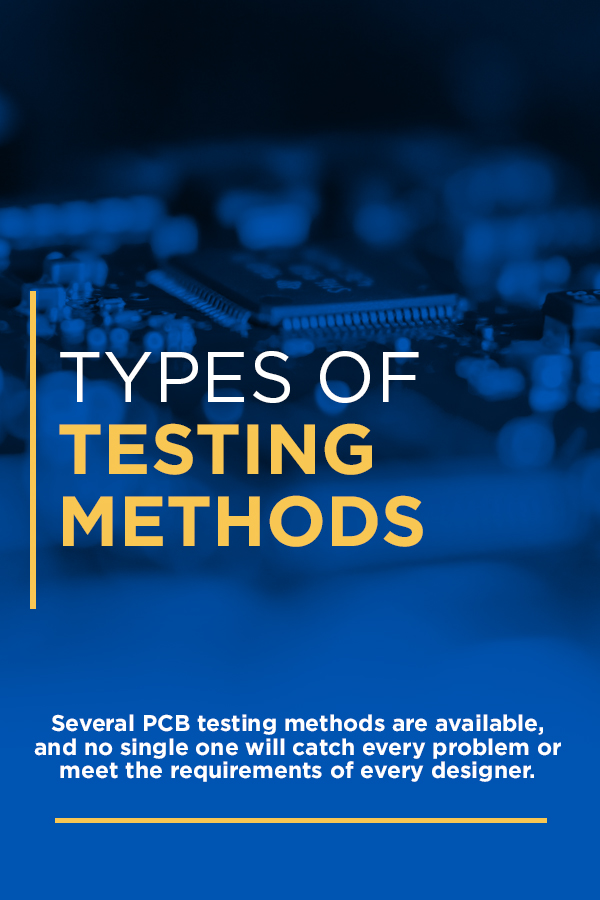 Using the ICT method, a manufacturer can test individual components and measure their performance, regardless of the other components attached to them. Generally, this type of testing is best for 3analog circuits since it’s best at measuring resistance, capacitance and other analog measures. Additionally, the cost of the equipment means that this testing method is best suited for the final testing of stable, high-volume products, not for low-volume productions or early testing stages where the design may change multiple times.

The fixtureless in-circuit test (FICT), also known as the flying probe test, is a type of ICT that operates without the custom fixtures, reducing the overall cost of the test. First introduced in 1986, FICT uses a simple fixture to hold the board while test pins move around and test relevant points on it using a software-controlled program. Since its introduction, FICT has gained widespread use throughout the electronics manufacturing industry for its versatility.

FICT testing is used for the same things as traditional ICT, but because of the way it goes about testing, it offers different advantages and disadvantages. While FICT is able to adapt to new boards quickly, easily and cost-effectively, with a simple programming change, it tends to be slower than the traditional ICT. This quality makes it an ideal testing method for small-production tests and prototype testing but less effective for large-scale production.

A functional circuit test is exactly what it sounds like — it tests the function of the circuit. This type of testing always comes at the end of the manufacturing plan, using a functional tester to check whether a finished PCB performs to specifications.

Some answers to common questions about functional circuit tests and how they work can be found below:

The boundary scan test looks at the wire lines on PCBs and is widely used as a way to test integrated circuits when it isn’t possible to reach all the nodes of the circuit. In this type of test, cells are placed in the leads from the silicon to the external pins, testing the functionality of the board.

The big differentiating quality of this type of test is its ability to assess a board without reaching all of its nodes. This quality is an important one for evaluating integrated circuits with multiple layers and high density since these types of PCBs have been becoming more common in recent years.

In fact, this testing method is quite versatile and able to be used for several applications, including system-level tests, memory testing, flash programming and central processing unit (CPU) emulation, among other functions. It’s commonly used in field service to detect problems in functioning systems.

How to Protect Your PCB With Better Designs

Essentially, designers use these techniques in the schematics and simulation stage to ensure a PCB meets various parameters and standards before it’s sent to the manufacturing stage. Learn more about DFM, DFA, DFSC and DFT below.

DFM is the process of arranging a PCB topology with the manufacturing process in mind. With this design mentality, the PCB layout topology is intended to mitigate problems that typically occur during the fabrication and assembly processes, including:

DFM tests should be implemented early in a project timeline to reduce overall costs and development time. There are plenty of software programs available that identify issues like those listed above.

For any PCB assembly, it’s essential to attach components securely to the circuit board. Unfortunately, doing so can be difficult when the design is hard to assemble, which is why DFA is essential. With DFA, the goal is to determine how to design the PCB so that the assembler can complete their job quickly and effectively.

DFT is a type of design that helps make testing more thorough and less costly. Essentially, PCBs designed with DFT in mind are designed to make it easy to detect and locate failures. This way, it’s easier to run tests quickly and accurately, reducing the amount of time needed for testing. For this to work, designers have to know exactly what type of testing methods they’ll be using at each stage of production and design the PCB to work optimally with them.

DFT can require a great deal of additional design and engineering effort in the PCB design process, easily making up for the amount of time saved during testing. The amount of time spent, however, is easily made up for with an overall decrease in manufacturing costs. With faults easier to find, it’s less likely for PCBs with hidden faults to be sent out, reducing the cost of customer dissatisfaction and potential recalls.

One thing that many designers don’t consider is the life cycle of a product or component. Often, certain components become obsolete during the product life cycle of a PCB, and it becomes more difficult to source that component in a cost-effective way. It’s essential to consider component life cycles when designing new products with DFSC techniques.

Staying aware of life cycles includes talking to an experienced electronics contract manufacturer to determine stock availability and alternate sourcing for the components of a PCB early in the design process. In the long run, this DFSC strategy will help save money by ensuring a long lifespan for a PCB design.

Regardless of the method you use, PCB testing is an essential step in the design process, helping to save your business a great deal of time and money by preventing bugs before they affect your production. However, to successfully run tests on your PCBs, you need a supplier you can trust to ensure that your prototypes are made to order every time. Millennium Circuits Limited can help.

We provide several prototypes and small-scale production services that can help speed up your testing process. With incredible reliability and no hidden fees, we make sure you can trust us to provide you with high-quality prototypes for your next round of PCB testing. Get a quote today!